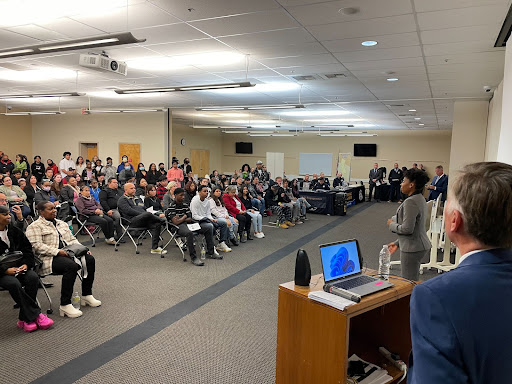 The rule of law is one of the components in our society that ensures stability and order. The Sacramento County District Attorney’s Office acknowledges this and seeks to educate young people on topics pertaining to this essential principle of the United States democratic system.

From Sept. 29 to Dec. 15, high school students from 36 different high schools (within the Sacramento region) came together over Zoom to learn about the criminal justice system from professionals in the field through the District Attorney’s Youth Academy.

“I joined this program to learn about our community and the problems going on,” said Austin Aranda, a high school student who participated in the Youth Academy this fall, “and how we can help in the future to make our communities a safer place.”

“The DA Youth Academy was set up to help students actively learn about the criminal justice system,” said supervising deputy district attorney Rochelle Beardsley. “We wanted them to hear from our criminal justice partners and engage in open communication between law enforcement and themselves concerning issues that affect youth today.”

At the Academy, students learned about and experienced what those professionals have to do in their careers and the education they have to achieve, and received other information related to the justice system.

“I enjoyed learning about the K-9 unit and the gang unit,” said Faith Parker, an American Christian Academy junior. “I loved meeting the K-9 and his handler. I loved getting an inside (look) on the gang unit’s job as well.”

The K-9 program was taught by Sgt. Aaron Thompson, who works for the Sacramento Police Department Canine Unit. Thompson, accompanied by canine Cooper, focused on what type of jobs these canines have – like sniffing for bombs – and provided other examples of when the dogs were utilized.

“In the K-9 presentation, there was a video of an officer with his dog, and that really opened my eyes to how —well trained and how hard the trainers had to work to get the dog that good,” Parker said. “I mean, the dog’s eyes were locked on its handler at all times, and it looked so happy to be working.”

Parker said the class raised the respect she had for canine handlers.

“It was already high, but it went up after hearing how much work the handlers have to do,” Parker said. “How much time they put into making sure their dogs stay sharp in their training. I also loved watching K-9 Cooper just sit there next to his handler, happily licking him the whole time. It was quite funny.”

Parker said she wants to pursue a job in law enforcement, specifically in the gang unit, and learning about it in the academy was a great way to start.

“I’ve always had an interest in it,” Parker said. “And the program really showed me that I would love to work in that unit one day.”

Parker said her mom introduced her to this program because she knew about Parker’s interest in law enforcement.

Parker isn’t the only student with this kind of experience in the Youth Academy program. She’s one of many who had the opportunity to witness snapshots of what happens behind the scenes of the legal system, as well as law enforcement demonstrations provided by the Youth Academy and several other organizations.

Students had a variety of motives to join the program, but all were related to wanting to learn more about the justice system and law enforcement and how they operate.

“I wanted to get more in-depth with law studies but couldn’t fit it into my school schedule so I saw the opportunity and took it,” said Bhavish Deo, a junior at Sheldon High School.

Another student noted how recent political events influenced her decision to join the program.

“I joined this program because I was really getting interested with law after hearing about the (U.S. Supreme Court ruling that overturned women’s right to obtain an abortion) and the different practices really intrigued me,” said Saahi Madras, a junior at Vista Del Lago High School.

Some students were interested in a career related to the law before joining the Academy, while others were uncertain whether a law-oriented career was for them.

Rida Fatima, a junior at Inderkum High School, said the program opened up the realm of different careers in a legal profession.

“I am interested in pursuing a career in law, but I am still unsure about what field,” Fatima said. “However, this program gave me more options that I can look into and choose upon.”

At the Academy, students also could ask the professionals questions, which students said created a more enriching environment for everyone.

“I really like how each presenter always makes time for questions at the end,” Madras said. “It really adds a good closure for that lesson.”

“I feel it’s important to inform our younger generation of the positive impact that people who work in the justice system can have in explaining what it is we do and how we go about it,” Garbutt said.

Students noted other positive aspects of the program, such as learning about some of society’s dangers.

“I learned about various issues plaguing our society, as well as the structure and programs involved in our justice system,” said Tyler Erickson, a Vista Del Lago High School junior.

Aranda expressed a similar sentiment, saying, “It doesn’t matter if you do not want to be in any of the law fields. This program benefits everyone to be prepared for the real world and its dangers.”

Thank you for your support. Each $2000 raised allows us to hire a student journalist, pay them $1200, and offset costs of training and support by program staff.