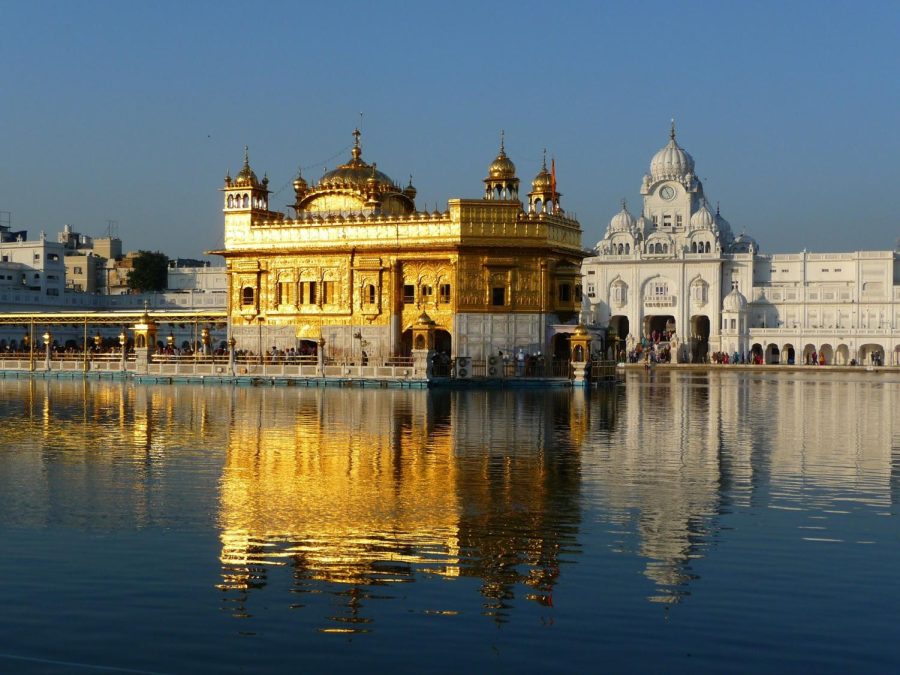 The Golden Temple in Amritsar, Punjab, Indian, site of the beginning of anti-Sikh violence in India in 1984.

Operation Blue Star was a military operation carried out by the Indian Army in order to remove Jarnail Singh Bhindranwale, a Sikh leader who led a faction that operated as a separate government in Punjab, and his followers from the Golden Temple in  Amritsar, Punjab, India in 1984. But Sikh immigrants in America still memorialize this tragic event and its aftermath four decades later.

The attack was ordered by Indira Gandhi, a Hindu who was the prime minister of India from 1966 until 1977 and then again 1980 until 1984. She ordered the attack on the Golden Temple, one of the holiest sites for Sikhs. It is located in Amritsar.

The army barricaded the entire place to cut off its food supply. They electrified the Sarovar because tSikhs couldn’t survive more than a few days without water. A Sarovar is sacred waters of a pool, or moat like tank, built around or close to a Gurdwara, a place of assembly and worship for Sikhs.

The attack was carried out on the martyrdom day of Guru Arjan Dev Ji, a day when the Gurdwara would be filled with innocent Sikhs.  Between 5,000 to 7,000 Sikhs were killed during the attack on the Golden Temple.

The Golden Temple was heavily damaged and the government provided no funding to restore it to its original state.

On October 31, 1984, Indira Gandhi was killed by her Sikh bodyguards as an act of vengeance for attacking the Golden Temple and killing so many innocent Sikhs.This began the ruthless attacks on Sikhs.

“Indra Gandhi was not innocent, since she was the one who targeted Jarnail Singh Bhindranwale and his followers rather than choosing a peaceful resolution,” said Simar Gill, a sophomore at NP3 High.

The night of Indira Gandhi’s assassination and the following morning, Congress Party leaders met to distribute money, liquor, and weapons to supporters cause to further harm to Sikhs.

“It was a horrible event for us Sikhs, we have been so divided ever since,” said Jasmeet Virk, a senior at Natomas Pacific Pathways Preparatory high school.

Gandi’s adherents handed out lists to the mobs to find the location of Sikh homes and businesses in the city of Delhi. Without the lists, it would’ve been impossible to find the Sikhs.

Congress Party leaders led predominantly Hindu mobs in attacks on Sikhs and the police acted as though nothing was happening, refusing to help Sikhs who were being attacked.

“It’s just how the system of India works. I just feel disappointed and hurt to see what type of country India has become, to not even stand up for their own people,” said Gill.

The mobs entered predominantly Sikh neighborhoods and attacked every Sikh they laid eyes on. Sikh women were raped in their own homes.. Rioters would stop public transportation then lynch and burn the Sikhs they caught on the buses.

Rioters were shouting “Khoon ka badla khoon” (“Seek blood for blood”) as they tried to find Sikhs to harm.

Official numbers put out by the government said 3,000 Sikhs were killed but the number is estimated by some to be closer to 17,000.

“It’s wrong that killing one person deserved for this whole genocide to occur. This wasn’t the end, Sikhs continue to suffer till this day,” said Gill.

The Nanavati Commission began an investigation on the 1984 Anti-Sikh Violence. It was led by Justice G.T Nanavati, a retired judge of the Supreme Court of India.

The commission submitted the report in February, 2004. It concluded that the accounts of witnesses and victims indicate the Congress leaders had incited and helped the mobs in further attacking the Sikhs.

Yet around 240 cases were closed without any investigation. It has been 38 years since the 1984 Anti-Sikh violence and only 10 cases have resulted in conviction.

“I feel truly sad, but the Indian government will never acknowledge their responsibility, because there’s no pressure too, they don’t care and never will,” said Virk.

According to one report, a Sikh was killed every minute in the streets of Delhi during the riots.

The terrible and ruthless happenings of 1984 continue to affect the Sikh community world wide, including the United States.. It was a time that Sikhs were incredibly vulnerable and the government did nothing to help, instead incited the violence.

“This event is important because of the number of killings the Sikhs faced. If you put yourself in the position of the ones who were hanging on to their lives, it’s difficult to even think about the amount of violence they were going through, seeing their family members and others being killed in front of you. It was just a miserable time, in which India took no action to stop it and shows how Sikhs were treated, “ said Gill.

In the past couple of years, California, Pennsylvania, and New Jersey have condemned the Anti-Sikh violence and termed it as a genocide and organized and systematic killing of Sikhs.

“Are the victims affected by it going to get justice? No. Words don’t mean anything without action, what I mean by action is catching the criminals who killed and dishonored these Singhs and Kaurs,” said Virk.

Sacramento Sikh students interviewed say that the 1984 events in India are not something they talk about in school despite it being a genocide of Sikhs.

“I do feel 1984 Sikh riots should be taught in schools, because it shows us one day your neighbor can be the devil,” said Virk.

Sikh students say that Sikhs have been mistreated by the Indian Government for a long time, that they are mistreated for simply being Sikh.

“If we forget what happened to us it will repeat either in India, or anywhere. We are the minority. We are already small in population, we must educate ourselves in our history, no matter the generation gap between us, and the Motherland Punjab,” said Virk.